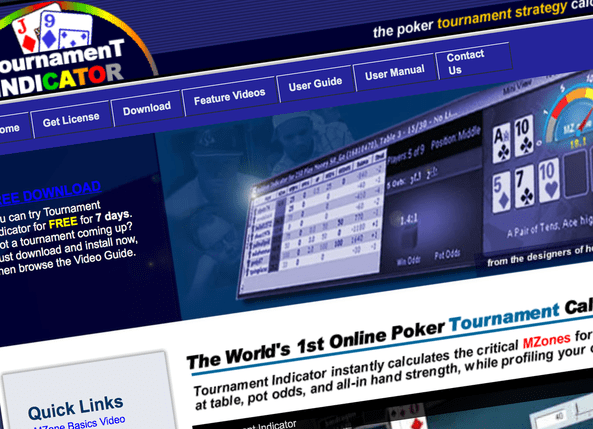 Tournament Indicator originated from the HI programming feature set, but added tournament specific features such as streaks and balances, match cards, and of course the critical M and MZone information that shows the user at a glance a comparison of their stack size to the blinds and antes.

This is not only important to know during MTTs but also sit and go tournaments and even heads-up or short table situations.

If you play online poker tournaments, this software is an essential part of having an advantage over your competitors. Making the money just got a whole lot easier!

Of all the poker calculators available on the market, none of them have ever addressed the needs of the amateur online player that focused his play and growth in the game by way of tournaments. Let’s face it, the new players that come to this game are by and large, influenced by tournament action seen on television.

So why hasn’t this huge segment been addressed in software? The reason (at least in part) is because programmers may feel there are just too many variables and nuances in a tournament that are simply too difficult to quantify. Stacks, position, structure, escalating blinds, profiles, payouts, rebuys, qualifiers…. and on and on. How can a poker calculator cope with that?

Now things are getting interesting because recently, I got an email from the designers of Hold’em Indicator. They tell me they have a new piece of software for tournaments, and ask if I could I test it for them. Now just the fact it’s from the group who designed the best poker calculator interface on the planet, I am now far less skeptical than I am optimistic.

I start playing with this brilliant blue, sharp looking software and discover it is based upon the MZone strategy, a key decision factor professionals use in real tournaments. In fact Dan Harrington predominantly based his top rated tournament strategy book on this single concept. “The most important single number that governs your play toward the end of tournaments is M, which is simply the ratio of your stack to the blinds and antes. This number is crucial and you must develop a facility for calculating it quickly and easily at the table” says Action Dan.

I used the Mzone tournament strategy myself and went on a respectable run last summer earning $25,000 in tournament winnings. Not huge to some of you, but these were from very low buy in tournaments. I made 41 final tables in three months! To put this in perspective, I made one final table in the two years before that! I even created a spreadsheet that I used by my tournament window that calculated the Mzone with some inputting on my part. Yes Dan, I agree. Understand the MZone, and you can start winning tournaments – even online!

So upon that good starting premise I tested the “tournament strategy and poker odds calculator” software. True to form, I am impressed with its simplicity and seamless functionality. Now finally, thank you for this, I don’t have to calculate the Mzone anymore. Not only that, it calculates the Mzone for my opponents as well.

I find myself wondering why this product not been created any sooner. I mean most internet players play tournaments, right? This is especially true of the hundreds of thousands of players who are working from limited bankrolls, just trying to get ahead in this game.

Here is the clever reality of Tournament Indicator. It avoided the dubious challenge of making recommendations in a tournament – by NOT making recommendations! It does however provide you with an array of indicators (as well as the MZone) that allow YOU to make the right decision at a game critical intersect. These same “indicators” are what the pros use to make to make correct decisions in tournaments. Making correct decisions win tournaments, but often those decisions may seem, and quite likely are, counter-intuitive to standard book play. Tournament Indicator shines a bright light on those opportunities, and will guide your way to more money finishes, and deeper money finishes.

If you are in that group of striving online tournament players learning your game and working towards earning some prize money worth bragginâ€™ about, then Tournament Indicator is your ticket. In addition, this is about the best piece of software you can have running for single or multi table sit and go action, as it works just as effectively.

The brilliant simplicity of the Tournament Indicator software is not lost in this, the most feature rich poker calculator ever created. Besides the critical Mzone, there are extensive profiling indicators, which you can adjust yourself, if you like. I also really love something Tournament Indicator calls MatchCards. On a screen you can toggle to, your hole cards will be matched up against other common hole cards that may be putting pressure on you. When your do or die moment arrives, you are going to have to make a good, and perhaps uncommon decision. MatchCards is going to let you know exactly where you stand. This feature alone is worth the investment.

Someone at Tournament Indicator was seriously thinking about real tournament action here. Evidence of which is within the profiling grid, where there are also columns that monitor streak and balance totals – as in, how have your opponents’ stacks changed, and how many hands have they won or lost over the last 10 deals. If you want to know which of your opponents is (ala Mike Sexton) frying an egg on his head, just refer to these indicators. We all know the tempo of a tournament changes rapidly at times, and that is why tournament play is all about what has happened recently. Tournament Indicator keeps you as the most informed player at the table.