Stud Indicator is the only Poker Calculator designed for online players who play Stud, Stud Hi Lo, or Razz. 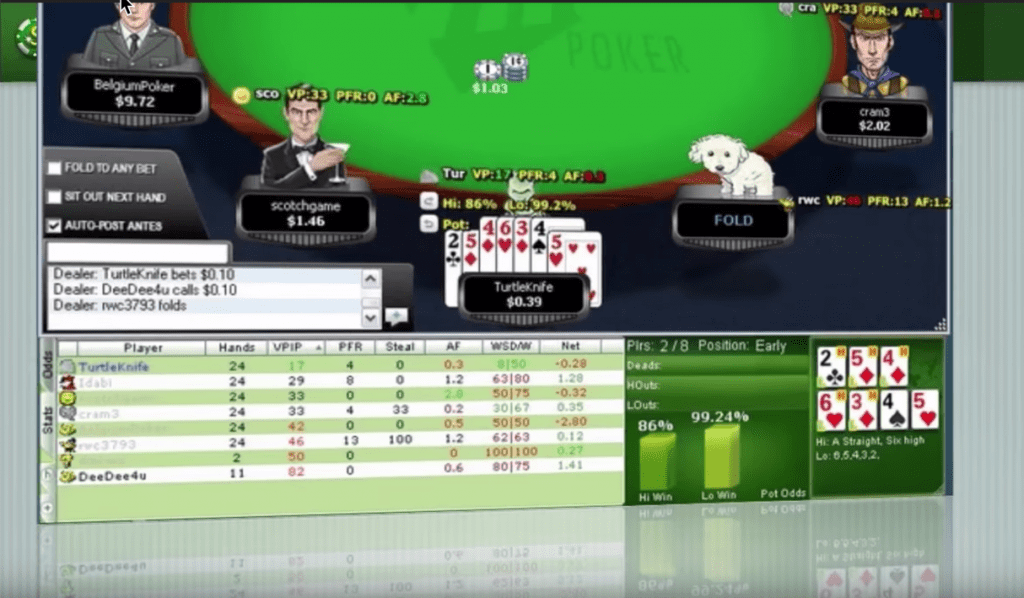 Long before there was community card poker (hold’em and omaha) games, there was – and is – stud. Stud poker has been around for more than 200 years, a game made famous in hotels and saloons, mining and bush camps, and riverboat gambling in the formative years of America.

As the popularity of hold’em swept the planet, stud poker took a back seat for the millions of players who chose NL as the game of choice. Save for those few who really love the game of poker and sought out more game variations to help build their skill. To that end, Stud is much more of a skill game than holdem, but that leaves wide open a great opportunity for players who want to learn and play Stud. With the help of Stud Indicator, that can be a reality today that can be turned into a profitable opportunity in short order.

The indicator group of software programmers releases STUD INDICATOR, which can be used for Stud, Razz and Stud HiLo. Have you always thought about playing or learning stud poker? Well this product may very well be your segue to learning a new game and taking advantage some weaker opponents who skipped 7 stud poker school.

The busy team of programmers that brought you tournament indicator, hold’em indicator and omaha indicator, have now added stud indicator to their lineup of online poker calculator software. Stud indicator provides profile tracking, drawing odds, and adjusts the outs a player has according to all known cards on the table, dead or alive.

What a tool like stud indicator can do for the game online is provide multi-tabling as a viable option now for seven card stud, razz poker, and seven card stud hi Lo – all of which the software can effortlessly comprehend. You see the game of stud requires a much higher focus then Texas hold’em or Omaha poker because at any time on those games you can basically look up in the board and surmise your mathematical situation. With stud, having a grasp of all known cards on the table is very important to make profitable decisions in terms of draws you or your opponent may be playing for. But some of the cards may already be folded.

For example, if you were on the heart flush draw, but you knew for a fact that 3 hearts have already been discarded, and another one is showing in your opponent’s hand, then the probability of you hitting your flush draw is severely effected. So it pays to know what cards have already been discarded in the game. That in itself is a serious deterrent for multi-tabling seven card stud games online because it really does go to a cash player’s bottom line hourly rate, something that cannot be ignored with rounders.

Enter STUD INDICATOR. This tool tracks all up-cards at all times in the game, and in addition to that, adjusts for how those cards might be affecting your draws. This is displayed graphically with win odds and pot odds displays clearly shown in the right-center of the tool.

There is also profiling data of the clean and direct style indicator users are used to. You can toggle to this profiling grid which shows Hands Played, the VPIP, PFR, AF, WSD/W, and NET Gain or Loss. As well the poker software describes your position and the quality of your starting hand based on standard starting hand guides for seven card stud.

The software attaches to your poker table instantly, and can store historic data of you and your opponents that you play with for up to two years. You can use stud indicator for online 7 card stud games, the low game of stud called razz, and 7 card stud hi lo. It can be used in cash games and tournaments simultaneously.

Stud poker games online are becoming more popular.Admittedly, the volume of stud games online is low, however that is increasing with the popularity of horse games and the realization that opponents in stud games are often weaker caliber, making settings profitable for people who might really want to learn the game.

Stud indicator is available through a new player sign-up or an annual license payable by credit card or PayPal to the amount of $69. Currently the software is working on full tilt poker, poker stars, and party poker. However as with all indicator products, work is currently being done for compatibility on all online poker sites.

Want to learn 7 card stud? You can sign up for my free video lessons, but you can also have a sneak peek right here: