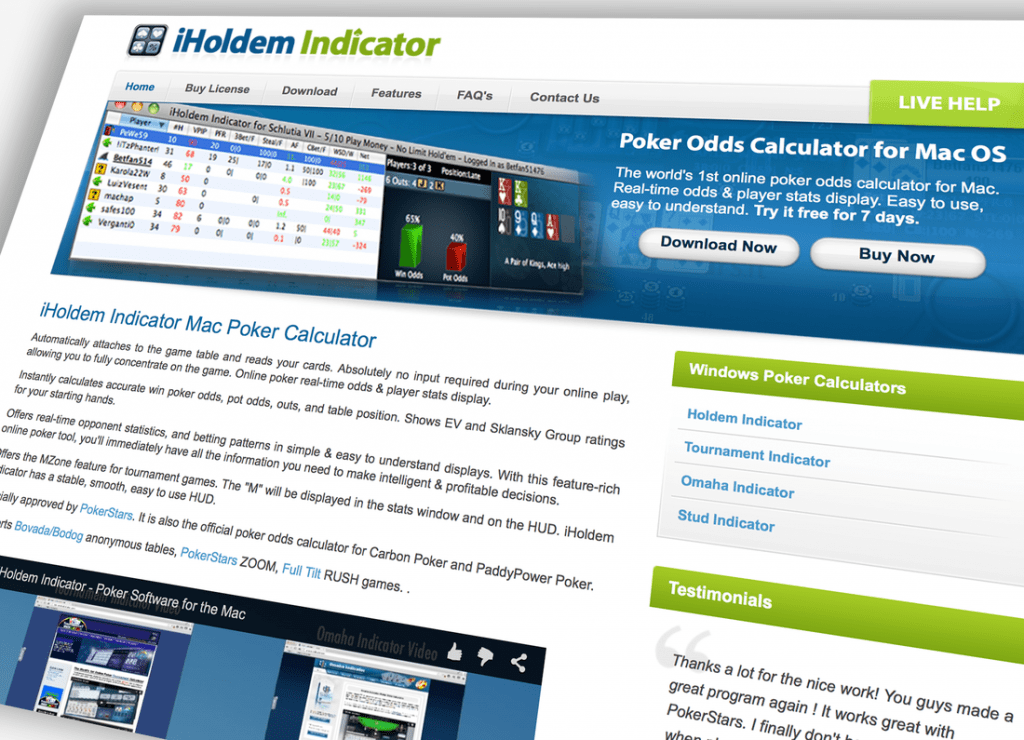 Designed from the ground-up, based on the Indicator Group’s proven PC products that include Holdem Indicator and tournament Indicator, iHoldem Indicator is just as fast, just as accurate, and just as helpful in making you the best online poker player you can be.

“As an online poker player for years, I only played on my PC computers as a matter of necessity. My go to computer has always been the Mac, and now, finally I have iHoldem Indicator. This will eventually allow me to put my PC to rest for good!” Marty Smith of PokerCalculatorReport.com

Try the FREE 7 DAY TRIAL HEREIn saying that, the software looks and works much the same as it’s PC counterparts but operates on an entirely different programming platform, which the team at Indicator tells me is much more difficult to build. This has resulted in some limitations, but more on that later. The exciting news of course is that Mac users now have a real time poker software calculator product that displays win odds and pot odds on every round, as well as a slew of profiling data such as Aggression Factor, VP$IP, and PFR, 3Bet, Cbet, WSD etc.iHoldem Indicator worked extremely fast during my time in BETA with it, and because of the similar layout it shares with it’s PC siblings, there was virtually no re-training involved in getting it up and running. That was a relief because this program was more than a year in the making. However, with the release of v1.0, there are some notable limitations with iH.Try the FREE 7 DAY TRIAL HEREIt really only works on PokerStars and Merge Gaming Network right now, and although it does work very well with ZOOM poker, the HUD feature is NOT available for ZOOM at the moment. Now the guys at Indicator group assure me that it is their intention to have iH working on as many Mac sites as there are poker rooms for the Mac, and since these guys have been over delivering since 2005, I am gonna be okay with their word on that. Keep in mind there are additional programming challenges with the Mac platform, which is one of the reasons why iH is the first real-time poker calculator for the Mac.One of the real benefits for Mac users is that iHoldem Indicator has combined the features of Holdem Indicator and Tournament Indicator into a single product. Meaning you can use iH for tournaments AND cash games AND ZOOM games simultaneously. If the poker software reads your table as a tournament, it will also display the M of your stack, which is a must-have for making critical tournament decisions.iHoldem Indicator costs $99 USD and is competitive with the other major software products such as Poker Tracker, and Holdem Manager. However, as with other Indicator products that is a LIFETIME licence fee and you will never be charged for the constant updates, versions and improvements this company regularly adds.So bottom line – yes I can absolutely recommend iHoldem Indicator, but with a caveat for having some patience with it’s limitations at this point. In addition, the poker program has a fully functional 7 day free trial with no obligation. Check it out here.